At least 22 people were killed and 1,031 others were injured after a massive earthquake with a magnitude of 6.8 rocked the eastern Turkish province of Elazığ Friday evening.

In a press conference held later on Saturday, Interior Minister Süleyman Soylu said four people died in Malatya's Doğanyol district in addition to 18 others in Elazığ province, raising the total death toll to 22. Soylu said 39 survivors have been pulled out from rubble since the earthquake. Efforts are still ongoing to rescue 22 people believed to be under rubble at various areas in Elazığ, he added.

A woman was rescued 14 hours after the earthquake hit the region, bringing the total number of rescued people to 10, including two children.

A pregnant woman who was pulled from the rubble 12 hours after the tremor was among the survivors. A 12-year-old girl, who was rescued 11 hours after the earthquake, died later at the hospital.

Koca said that 1,031 people have been brought to hospitals with various injures. Treatments of 137 patients continue but none remain in critical condition, Koca added.

The quake struck Sivrice district at 8:55 p.m. (1755 GMT) from a depth of 6.7 kilometers, according to AFAD. Sivrice, a town with a population of about 4,000 people, is situated south of the Elazığ city center on the shores of Lake Hazar. The lake is one of the most popular tourist spots in the region and the source of the Tigris River. It is home to a "Sunken City," with archaeological traces dating back 4,000 years in its waters.

Soon after the initial quake, the province was shaken further by at least 274 aftershocks with at least 12 above magnitude 4, with the highest being an aftershock of magnitude 5.4.

The earthquake caused panic among residents of major cities of Diyarbakır, Şanlıurfa and Adıyaman. No major damages were reported from the region. According to initial reports, the earthquake was felt in provinces as far as southern Adana and northern Samsun, along with northern Syria and Iraq. Local media in Lebanon said the cities of Beirut and Tripoli also felt the quake, along with similar reports from Israel. 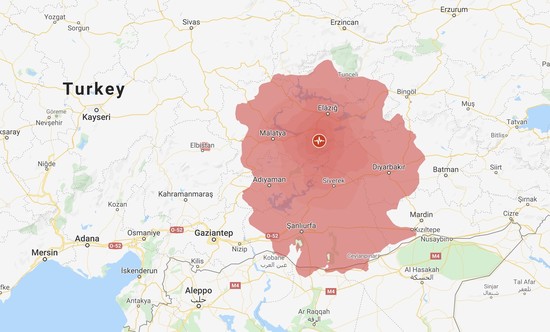 USGS data showing where the Elazığ earthquake was felt the most.

President Recep Tayyip Erdoğan said all steps were being taken to aid people affected by the quake, which caused widespread fear. "We stand by our people," Erdoğan said on Twitter.

"170 additional ambulances have been dispatched to Elazığ and Malatya provinces. Air ambulances are also ready to help the affected," Koca stated earlier on Friday, adding that more than 30 residents are under the wreckage in Elazığ. The search and rescue operations are continuing and the death toll could rise, said Koca.

Soylu said the injured were transferred to hospitals and facilities have been opened to serve those who have been affected.

Five buildings in Sivrice and 25 in Doğanyol district were destroyed, said Kurum. He also cautioned residents not to go into damaged buildings.

National Defense Minister Hulusi Akar said the army was ready to step into action if need be.

Soon after the quake, officials said hundreds of trucks carrying humanitarian aid, including food, medicine, blankets and tents were dispatched to Elazığ and neighboring provinces. Thousands of search and rescue crews, as well as medical personnel were also sent to the area.

Apart from brief electricity cuts, no major infrastructure damages have been reported in the aftermath of the earthquake. The greatest challenge for locals is harsh winter conditions in the region, where temperatures plunge as low as -8 degrees Celsius during the night. Emergency staff and people waiting at the scene lit fires in the streets to stay warm in freezing temperatures. Sports centers, schools and guest houses were opened to accommodate quake victims in Malatya.

Turkey is among the world's most seismically active countries as it is situated on several active fault lines, and dozens of minor earthquakes and aftershocks occur daily. 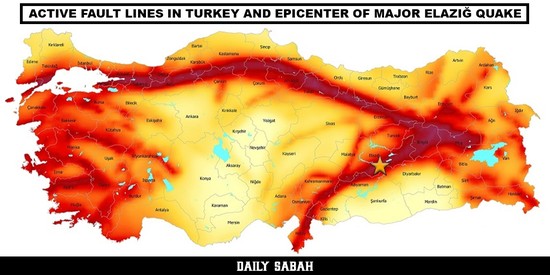 The earthquake in Elazığ was triggered by the deadly East Anatolian fault line, stretching some 650 kilometers from eastern Turkey's highlands to the Mediterranean, from where it turns southwards and meets the northern end of the Great Rift system separating African and Arabian plates. The strike-slip fault was formed millions of years ago as the Anatolian plate was being pushed northwestwards by the Arabian plate.

Experts noted that the line has mainly been silent after producing a series of devastating earthquakes recorded in the 16th and 19th centuries. However, major earthquakes with significant intensity often occur in the region. In 2010, Elazığ province was hit by a 6-magnitude earthquake, killing a total of 51 people in the villages of the Karakoçan district. Some 350 kilometers to the east in 2011, an earthquake struck the eastern city of Van and the town of Erciş, some 100 kilometers to the north, killing at least 523 people.

The fault line is now expected to produce major earthquakes to the southwest.

The most potentially devastating fault line in the country is the North Anatolian fault line (NAF), where the Anatolian and Eurasian plates meet. The NAF has also produced devastating earthquakes throughout history.

More than 17,000 people were killed and over 43,000 were injured when a magnitude 7.4 quake rocked the Marmara region for 37 seconds in the early hours of Aug. 17, 1999, with its epicenter located in Gölcük province, some 75 kilometers southeast of the Bosporus. Three months later, on Nov. 12, 1999, 845 people were killed and nearly 5,000 injured when a magnitude 7.0 earthquake hit Düzce province, about 120 kilometers northeast of Gölcük.

In September, a 5.8-magnitude earthquake in the Marmara Sea shook Istanbul and sent panic across the city, injuring 34 and damaging 473 buildings.

American Horror Story star Harry Hains has died aged 27. His mother Jane Badler, star of sci-fi epic V and Australian soap Neighbours, revealed Harry had been battling through mental illness and addiction before he passed away. Breaking the tragic news ...

A man has died after a shark attack off Western Australia's coast.

A massive sinkhole swallowed a bus whole in China resulting in the death of at least six people and left 16 others injured. The bus in question stopped by a road in northwestern China to pick up passengers before the sinkhole occurred. This instance is only ...

Sony has won the ongoing console war hands down. The PlayStation 4 has outsold rival Microsoft's Xbox One by a huge margin, but the Japanese giant might not be able to recreate the magic with the PlayStation 5 with the way things are going right now.

An off-road vehicle is a vehicle that is designed to travel over rough ground and designed for or capable of cross-country travel on or immediately over land, water, sand, snow, ice, marsh, swampland, or other natural terrains. Global Off Road Vehicle Market ...

Annnnd that's a wrap folks. Billie Eilish has taken out the Hottest 100 of 2019 with 'Bad Guy'. It's history in the making too. Billie Eilish is the first solo female act to win

The Aussie holds serve nicely. No worries with serving it out from 30-30. A huge sense of anticipation about this one. No surprise that many punters outside can't get in. Heartbreak for John Millman, but

Show Preview It's second versus third in an old-fashioned A-League blockbuster, Melbourne City hosting the red-hot Perth Glory in a match that could well be a finals preview. Join The Roar for live scores from 7:30pm

Tiger Woods may not be on the first page of the leaderboard, END_OF_DOCUMENT_TOKEN_TO_BE_REPLACED

In a move that would ... END_OF_DOCUMENT_TOKEN_TO_BE_REPLACED

Hope is a good thing. What isn't good is to keep giving END_OF_DOCUMENT_TOKEN_TO_BE_REPLACED